Imagine an EPL fan who has just awakened from a coma and who decides to look at the preview of this Monday night’s match-up.

In any other season, the above statements would barely get a look at, much less a second one. But the shocker of a season that the current one is, this hypothetical fan could very well go into another coma, due to a shock (if that’s medically possible !), when he / she gets to know that the roles have been reversed.

Who would’ve thought that just prior to the holiday mêlée of December, Leicester City would be sitting atop the table, a good 17 points above Chelsea (status prior to this weekend’s matches). Nobody would have imagined that the Top 4 leading scorers list would comprise players from Leicester City, Watford & Everton , with 2 of them, including the top scorer belonging to Leicester City and none from Chelsea even making the Top 25 scorers list!!

An even more shocking statistic would be that Chelsea have a Goal Difference of -7, with 24 goals let in and 57 shots on goal from inside the penalty area, highest in the league (source : BBC). I would imagine that more than the afore-mentioned role reversal, this stat would be the one that would actually send someone into a coma (medical T&C applied). I mean, this is the Chelsea of “park the bus” fame that we are talking about, with the canny operator, Mourinho still at the helm. Alas, it is reality that we need to face and however painful it may be to acknowledge it, it says that Chelsea, on current form, would need to play out of their skins to simply not lose against Leicester City, much less win against them.

Having said all the above, I do believe that Chelsea has shown signs of turning the corner. That includes Costa’s form as well, especially with his apology for the bib-throwing incident killing rumours of any rift with Mourinho and being a positive sign overall.

For this game, Chelsea would need to tackle the pace of the likes of Vardy & Mahrez, which means we might see Zouma play today (who knows, maybe even Kennedy). The rest of the line-up should be along predictable lines.

A quick glance above shows that we have more positives than negatives (6 vs 5) and although it isn’t much to brag about, it is all that we have now. More than tactics, it is some hope, optimism and fearless attitude that will bring about a turnaround.

We fans, though, as always, are behind our team and manager. Come hell or high water.

The day is June 20,1996. The setting being the 1st innings of an interestingly poised 2nd test between England and India at the Lords Cricket Ground. An occasion that can be overwhelming for the most seasoned of cricketers. But not for the young, shy and unassuming man who walks up to the crease -as the scoreboard reads 202/5- for the first time ever in international cricket. At the opposite end was a man- himself a debutant- who was playing like a dream. The two of them then get together and craft a symphony, the sounds of which still echo in the ears of the passionate cricket fan.

The shy, unassuming man- Rahul Sharad Dravid- since that day has stylishly,doggedly and like the man that he is, non-fussily made his way into cricketing folklore. A man who every time that he was written off, came back in a gladiatoral fashion. A man of few airs and fewer words still, he has amassed a mountain of runs, second only to another feted player of his time, maybe all time, Sachin Tendulkar. A man who in terms of stature and achievements is every bit immortal like his more feted contemporaries, yet in many ways was the most mortal amongst the lot, for his was probably the blood that was bayed for the most after every collective failure.

Although his final battle, a rare forgettable one, was against Australia, it can be said that his swan song was fittingly against England in England, a home away from home for he has enjoyed immense success in both Tests and ODIs there. The 2011 series, although disastrous for the team, was a personal success for Dravid. A dream of being part of the hallowed portal of centurions at Lords was finally fulfilled after 15 long years, an achievement he excruciatingly narrowly missed in his debut attempt, an achievement that other mortals can only dream of and one which many legends themselves haven’t achieved.

Feats such as being the world’s 2nd highest Test runs scorer, world record for the maximum number Test catches by a non-wicketkeeper, 2nd longest consecutive streak of test matches played, involved in the highest number of century partnerships in Tests, 10000+ runs in the two premier formats of the game, to name a few, have without doubt placed Dravid on the highest pedestal.

His cricketing performances are truly a legacy for the next generation. The stylish shots that he played are lessons on batsmanship, the runs that he scored, the matches that he won for India are all up there among the best, yet the greatest legacy that he leaves behind are virtues like an unwavering commitment to one’s duty, loyalty towards a greater, collective cause, humility towards one’s craft, nothing but respect for adversaries and above all, an unflinching passion, respect and love for the game.

I consider my generation (all 80’s born) to be fortunate for having witnessed an ordinary man perform extraordinary feats. Today, as Dravid bids adieu to an illustrious career spanning 16 glorious years, a sense of foreboding prevails, not just whether anyone else can fill the great man’s shoes but also whether the glory days for Indian Cricket in general will return. But as in nature, where one generation will ultimately be replaced by another, Indian Cricket will also welcome its new generation pretty soon. But only time will tell whether or not the legacy of such heroes will be carried forward.

As Rahul Dravid prepares to take guard for a new innings in his life, we would like to wish him the very best. Hope this one turns out to be as equivalently long, special and illustrious as his previous one.

The Grand Prix of football has entered the decisive last lap and if the events of the past 1 month are anything to go by, then we are well in for a photo finish. Come July 11th, a new order in world football will be established, when either Spain or Holland will emerge victorious in a shootout that has all the makings of an epic. It would be a 1st title for either of them and will make the winner the 8th different nation to win a WC & the 1st title for a European country outside of Europe.


Spain – the perennial under-achievers in world football, are making their 1st ever WC final appearance (with only a couple of QF appearances being their best results till date). The 2 time & current Euro champions have a lot of money riding on them, with most pundits and fans alike tagging them as the favourites. Their showing in the last 2 years and in this WC in particular, has proven how far they have grown as a footballing nation and that there is absolutely no place for all the internal (read:regional) rivalry that had been the bane of the earlier teams.

On the other hand, Holland- the perennial bridesmaids, are making their 3rd WC final appearance, this one coming 32 years after their previous such appearance. Having lost out to far inferior teams before (based on form & talent in those WCs only), they will be surely hoping to make amends this time around.”The Oranje” are definitely the weaker team when compared to the overall & individual talent that Spain possesses. But it would be foolish to write them off as they are in the finals on the back of some very impressive & consistent performances  over the past 1 year. They are on a long unbeaten streak and will ensure that it will not be a walk-in-the-park for Spain. 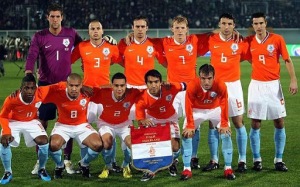 Holland are the underdogs for the final. Source:www.telegraph.co.uk
But who will prevail in the end? Will it be Spain’s powerhouse of talent or will it be Holland’s gumption? The magic will unfold on the night of July 11 and millions of fans are waiting with bated breath to find out what happens. So here is wishing for a great night of football and hoping that the best team will win.

LIONEL ANDRES MESSI . This is the one name doing the rounds in almost every football discussion these days. Not a surprise, considering that the Holy Grail of Football- the WC 2010 to be held in South Africa, is right here at our doorsteps.

As is usual with every WC, the fans are on the lookout for the one man who will stamp his authority on this edition of the WC. But never in recent memory have we seen one man’s name being chanted with such a crescendo and this not by just the fans but by most players, coaches and former greats as well. Such has been the magical effect that this diminutive footballer has woven around people. His style, speed and skills have left no one in doubt as to what he is capable of doing with a football. The way he has changed the nature of many a matches for Barcelona (his current club), is proof enough!

But will he be able to live up to the expectations of a demanding sports loving nation like Argentina? The pressure of the fans, his peers, all of whom are expecting nothing less than a repeat of Mexico 1986, when another diminutive Argentine named Diego Maradona had single handedly brought glory to his country. And fortunately or unfortunately, it is the same Maradona who is Argentina’s coach now. Maradona, who himself has regularly been in the eye of the storm for a variety of reasons, has also gone to the extent of anointing Messi as his successor.

With such huge burden on his young shoulders, it remains to be seen whether Messi will be able to cope with all this attention and still go on to achieve the ultimate prize in world football. But some people might be hoping for the contrary to happen, especially considering Maradona’s veiled threat to run naked around Buenos Aires’s city centre if they win the cup !!! Whether or not Messi can emulate his idol (hope it is limited to lifting the WC only :D), but millions of people across the world will surely be praying that he indeed turns out to be their Messiah.